Last night, just before twilight, my youngest son and I decided to walk to the local convenience store. It was a pleasant night (if a bit cool from the recent snow) and there were plenty of people out and about. I was wearing a red hoodie, my favorite sweatshirt that I've worn for years. I counted the steps - exactly 2,890 from the end of our driveway to the store and back.


As we were walking, my mind wandered from thought to action and back again, as it always does. My son and I spoke for a while, about skating and movies and gaming and what we would do this weekend. During the periods of silence, my thoughts wandered from thinking about my spouse to what I would make for dinner to what I would do at work the next day. Like most people, we were mostly occupied with the trivial thoughts of our day - decompressing, dreaming, hoping, praying, judging, relaxing. Being.

As we walked, the wind picked up and I put my hood on. It reminded me that Trayvon Martin was also wearing a hoodie when he was murdered last week. I tried to imagine what was running through his head as he walked to the store for his Skittles and iced tea. Was he thinking about homework, what subjects he liked to learn and what subjects bored him to tears? Was he thinking about or what he was going to have for dinner, hoping that his mother would make him his favorite meal? Was he thinking of his girlfriend, excited and uncertain like every other teenager in love?
Was he humming his favorite song, or thinking of writing a song? What was he dreaming about doing, or saying, or thinking, or becoming before he was confronted and stalked? What was he judging or evaluating before he was attacked? What was he hoping for before he was shot? What was he decompressing from before he died?

It was hard for me to imagine how quickly his thoughts - and life - must have turned.

Yesterday on the way to work, I heard a remarkable piece on NPR's Morning Edition about Donna Britt. Donna Britt is an author and a mother who is also Black. She and her sons explained how, beginning in their pre-teens, Donna would prepare them for a world of potential judgment and prejudice by telling them how to act in public to avoid drawing attention to themselves or appearing suspicious. Her sons told stories of how they have responded to provocation and suspicion throughout their lives. It was eye-opening and heartbreaking, because as a White male I have never had to think about those things.

It made me wonder how living like that - being under suspicion, being assumed as having negative intent, having to change who you are and the way you act so as not to upset the status quo, being constantly and routinely judged only by the color of your skin and the clothes you wear - must wear you down and change you over time. How do you stay true to yourself? How do you continue to dream and have hope? How do you plan for the future? How do you avoid staying angry all the time? How do you develop and maintain self-confidence without enjoying the basic freedoms that I take for granted, every single day? 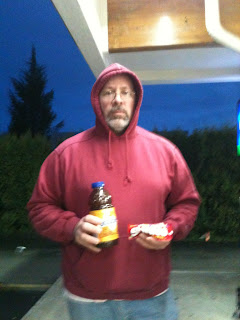 It's at that point that I broke down and almost cried. I was wearing a hoodie. I had walked to the convenience store with thoughts of hopes, dreams, and uncertainties wandering through my head. I took time on that walk to laugh and to be sad. I was just a normal person doing normal things. Trayvon Martin and I shared all of those in common. In a show of I don't know what, I bought Skittles and an iced tea. It just seemed right.


By putting those few items into my pocket, I even did something that should have aroused suspicion but didn't. Then I paid for my items and left, and walked 1,445 steps home without being accosted, stalked, or shot. Like always.  Trayvon Martin and I had a very different experience in that regard. In fact, as Donna Britt and her sons pointed out, my experience is different from the experience of virtually every other person in America who is not a White male.

The whole thing made me sad. I'm sad for our youth who are brought up in environments of hate and anger. I'm sad that some of them have to change who they are and alter their natural reactions just to stay alive and secure. I'm sad for what that does to their psyche, their emotional well-being, and their promise for the future. And I am sad that justice and equality and opportunity still seem so far away.

I know no other way to fight back than to confront my own feelings and biases and write about them. I know that I can do better. I only hope that we can do better together.
Posted by Jeff Sabo

The Best Parenting Book Ever